What are emoji and where do they come from? Where are they going? The story isn’t as simple as saying that they were invented by Shigetaka Kurita in the late 1990s and eventually outgrew the shores of Japan, though it could be. In reality, the story of how the emoji came to be is the story of the dawn of written language and communication. To do them justice means going further than Japan in order to discover how very Japanese they are.

This text was written by David Shimomura for Unwinnable in 2016 and reprinted here with permission. Thanks, David!

Pictures and images as used to convey meaning are quite literally from the Stone Age and have not fallen into disuse over the last 12,000 years. These earliest images are what are known as “pictograms” (pictures with meaning) and are the precursors to what emoji really are, “ideograms” (pictures that mean ideas). Ideograms convey concepts or ideas that require cultural fluency in order to be understood. So when you see a picture of dog with an X over it you know that dogs aren’t allowed as opposed to it signifying a horrific X beast spawned from the nightmares of cave dwelling city planners.

shān, the Chinese symbol for ‘mountain’

Over time, ideograms and pictograms grew more complicated and developed into written languages such as Egyptian hieroglyphics and Sumerian cuneiform script. Both of these languages took pictorial representations and simplified them into a standardized set of characters or forms. But Egyptian Hieroglyphics and Sumerian aren’t the only languages to evolve out of stylized (or abstracted) pictures. Chinese characters, also known as Hanzi or Han characters, are also logograms (a system where concepts are represented instead of sounds). One example of this abstraction principal in Chinese is the character for “mountain.” While the symbol “shān” no longer looks anything like a mountain one can see how the three points of the character were at one-point mountain tops and the “stems” were the dividers between the mountains. With a little bit of connect-the-dots it’s not hard to take the symbol for mountain and redraw it as a universal sign for mountains.

yama, the Japanese symbol for ‘mountain’

Chinese did not stop there. The language continued to evolve through usage and necessity to include new kinds of characters such as “compound” symbols formed either through the mixture of two or more characters’ direct ideograms or through the mixture of simple characters needed only for their sonic qualities. These new and evolving characters formed the basis for Chinese as we know it today and eventually informed Japanese through cultural cross pollination.

shin, the Japanese symbol for ‘forest’.

When Chinese was first introduced to Japan, the Japanese did not have a written method to express their language and much like any number of European languages, just borrowed someone else’s “alphabet.” This borrowing is evident in the character “yama” meaning mountain which is identical to “shān.” Modern Japanese is quite a bit more complicated than simply borrowed Chinese characters, but the basic principal still holds true, there are Chinese loaners and newer phonographic characters.
Within these Chinese loaners are other pictographic holdovers, as well as compound ideographs. An easy example of this is “ki” meaning tree and “shin” meaning forest which is written as a stylized version of three “ki”s. Fittingly, the pictographic holdovers are known as shōkei, which also means hieroglyphics.

But where does this put emoji?

Well the very word is borrowed from both Chinese and Japanese. It’s composed of “e” meaning picture and “moji” meaning character. Quite literally, emoji is a pictogram; it’s based on a system of writing that began its life as abstract ways to describe real world objects. The first emoji, mainly faces and objects, did exactly that. Mirroring the very similar emoticon (itself a portmanteau of the words emotion and icon), emoji took concepts and ideas and mirrored them and the catalog of emoji developed as more and more were needed.
This brings us right back to Shigetaka Kurita and the first emoji. When you consider that there are over 2,000 Japanese characters and a cellphone of the time only has around 12 buttons it’s no wonder that the quick impact of an emoji found a home on Japanese cellphones.
This necessity based development is almost entirely the basis for the reason that emoji of cultural significance to the Japanese far outweigh that of any other nationality or group. For instance, there is an emoji for moon viewing ceremonies, Children’s Day, hanafuda cards and oden. Sadly, there is no emoji to illustrate the vast superiority of Japanese vending machines. Though several emoji, like the hotdog, have origins in the US these are not specifically “American” emoji. The exportation of American culture has made them universal symbols. No other country comes near to having as many emoji reflective of their specific cultural identity. In fact, it’s almost possible that the baseball emoji is more geared towards the Japanese audience given that baseball is functionally the national sport of Japan.
This is reinforced by the fact that Unicode, the current emoji governing body, does not have strict standards for interpretation for how emoji artists should depict them. For example, the dragon. Of all the major cell phone manufacturers, only HTC depicts the dragon as a European style dragon with a plump belly as opposed to the serpentine dragon that any Dragon Ball fan would recognize. Another instance of this is the stoplight, which is depicted by both Google and Mozilla with the Japanese teal/blue instead of green, much to the confusion of Westerners. Strangely, Google also depicts the “melon” as a muskmelon, a highly prized fruit in Japan that lends it flavor to midori fruit liqueur and known as the “king of fruit” for no apparent reason.
Other examples of concessions come from redundancy. Since emoji are rarely culled from the ever-growing catalog it is easy to see how redundancy might occur. However, many instances of this redundancy are Japanese concessions. Some examples of these include a specifically Japanese style castle, a “bullet” style train and the inclusion of Mt. Fuji despite there being two other kinds of mountains. No one really needs two different mountain emoji but you know who does absolutely, 100%, need a Mt. Fuji emoji? The Japanese do.
All of these Japanese roots and loaners are reflective of the origins of emoji both as methods of expression but also as currently undergoing the same process that Japanese itself as a language underwent. Cultures all over the world are now being exposed to a symbol for “love hotel” and “Tokyo TV Tower.” Many of these symbols are being used to fill gaps in the emoji library. Due to its architectural history it does not take much imagination to view the Tokyo TV Tower as a surrogate for the absent Eiffel Tower.

As Japanese developed, so too did the emoji sub-language based on abstract images and pictures. Emoji are now doing more than simply expressing their direct pictorial translation. Consider the eggplant, to a growing number of people around the world the eggplant emoji has come to denote something for which there is no emoji, a phallus. And while this is certainly funny it also speaks to the growing and evolving nature of emoji beyond anything that the Unicode Consortium or any other grown-up technocrats can govern. Humans have an uncanny ability to take anything given to them and run with it.
More surprising still is that emoji have come to act as speech modifiers all their own. Ending a message with a dejected little face suddenly makes the reader understand the writer’s over emotional sadness. A face with a single bead of sweat on the side of an expressionless grin shows the dread in your eyes when asking someone out on a date. Emoji are doing more than shortcutting language (which humans also have a propensity for) but have added something to written language that was otherwise lacking, tone. They’ve become pictorial adjectives. They’re being used as the body language of the internet age.
And the future is uncertain for emoji. No, there is no impending or brewing emoji apocalypse. Instead, emoji are simply in new territory. Though there are many similarities between the formation, creation, and dissemination of languages and writing systems such as Chinese and Japanese we have never lived in a time were “messages with body language” can be transmitted as quickly and freely as we live now. In 2014, Bloomberg reported that around 8 trillion text messages are sent every year. This number is purely reflective of SMS and not messaging apps such as WhatsApp, Facebook Messenger or Google Hangouts. Language and communication are more democratic than ever before. If the people want an emoji for a dong they aren’t about to wait for Unicode to give them one. They’ve proven they’re happy to invent their own. There simply is no telling what the future holds for them. 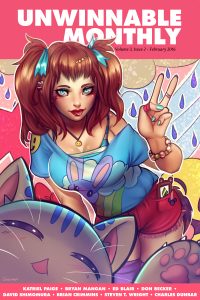 David Shimomura is a writer and critic who relishes nothing more than tearing down things on pedestals. Actually, he relishes petting all the dogs more. To recap, first dogs, then irreverent critique. To hear more about those things, follow him on Twitter.

This article was first published in February 2016 in Unwinnable Monthly Magazine, Issue 76. Reprinting on Language at Play was possible with permission from the author, David Shimomura, and Unwinnable editor Stu Horvath. If you liked reading it, visit Unwinnable.com and consider subscribing!